Behind the Scenes with MFW 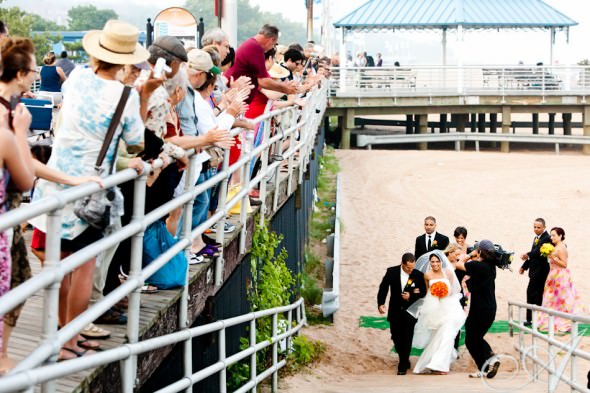 If you are anything like me, you have always wanted to be a part of a TV production- to see what happens backstage, so to speak; to watch as the characters move on and off screen; to observe the camera crews and the director. Well, Dave had just that opportunity when he photographed Christina and Ed’s wedding for WeTV’s My Fair Wedding. He followed the planner and star of the show, David Tutera, as well as capturing the bride and groom and their wedding details. So you feel like you were actually part of the shoot. Since I posted about the book earlier this week, I thought I would share the behind the scenes photos today. Tutera is not only an amazing planner, he’s a fabulous designer. He created a beautiful Mexican inspired wedding for Christina, whose Riviera Maya destination wedding had to be canceled. His first stop was to check on the decor at the hotel where the reception would be. His team was already doing a great job; he added a few more touches to the look.

Next he visited the bride who was in the process of getting her hair and make-up done. Never a private moment on a TV show.

This is when he reminded Christina of the 3 dresses she tried on. He is about to tell her which one he chose for her. (This also happens to be one of my fave moments each episode of the show. I can’t help loving that they don’t know which gown he chose. The suspense is super fun. And while most women wouldn’t want someone else to chose this most important of all dresses, I actually would have loved it. I had such a hard time figuring out what to get.)

Before and during the ceremony, there is tons going on both behind the camera and in front of the camera. These portraits show how David is working to make sure that everything goes off without a hitch. Before the ceremony he is checking to see everything is in place. As guests arrive, he greets them and helps them get where they need to be. During the ceremony, he is watching here, there and everywhere.

Being on a public Staten Island beach with lots of cameras, the wedding was sure to draw a crowd.

Still, the crew was pretty inconspicous during the ceremony. One team all the way back and two teams on the side at the front. No guests’ views were interrupted. As photographers, we pride ourselves on putting the wedding first. After all that’s why we are all there. So it is really nice that Tutera’s team also has this in their mind, even when their work is for TV.

After the ceremony, whether for TV or not, David brings his couples into the reception hall before all of the other guests, so that they can actually take a moment to enjoy the space he has created for them. So they can check out the details they have thought about and planned with him. Christina and Ed are clearly enamored with their colorful chocolate cake.

Their first dance in the dreamy tropical space.

One question we get about the show and working with David is: Is he really that nice? The answer is absolutely 100% yes. He is a truly down-to-earth, caring gentleman AND he likes to have a good time. He doesn’t dance at every wedding but when appropriate, he will enjoy the party with the couple and their guests. Enjoying a moment with the bride.

Dancing with a bridesmaid.

Clearly he felt a connection with this group and they with him. They even invited him into their group hug.

The folks who make it a televsion show. Yup, that’s a lot of paparazzi.

And finally, David and David. What a great day to be a part of! We are so thankful to David Tutera and his team for asking us to photograph this My Fair Wedding episode.