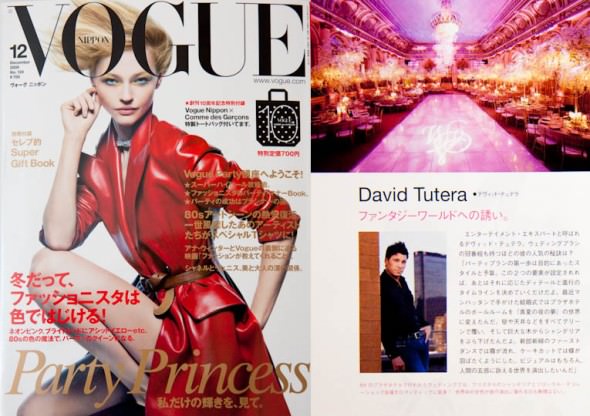 Huge congrats to our friend and colleague David Tutera for being featured in Vogue: Japan. And we are so excited that they chose one of our photos to highlight his amazing work. That’s right, we were recently published in Vogue Japan. International and chic, no?! I’ll be honest I can’t tell you all about the article our work is part of, because, as you would expect, it’s in Japanese, but what I can gather is that they were highlighting several vendors celebrated in the international wedding industry. They focused on florists and event planners, in particular. And David Tutera, whom we have worked with on several occassions, was number one on their list. It’s no surprise as his work is astounding- it completely captivates all of my senses.

Our image was taken during a wedding at The Fairmont’s Plaza Hotel in New York City. The whole concept was based around crystals and they were everywhere. The ballroom sparkled.

If you want to see more of David‘s work, definitely check out:

More of David’s designs still to come from a fall episode of My Fair Wedding.