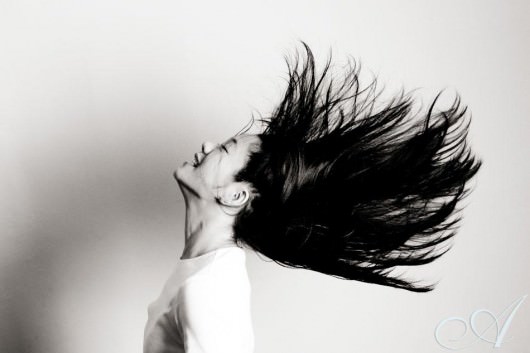 I’ve been wanting to do a hair donation for some time now.Â In the past I was either too impatient to let it grow or I was in an office setting where having hair that long just didn’t look professional.Â The organization I wanted to donate to, Pantene Beautiful Lengths, requires a minimum of 8″ and you need to leave a little on your head after the fact too so it does take a while to grow out, even for someone like me whose hair grows pretty fast.

I’d already let my hair get pretty long over the last year or so, and after leaving my office job I didn’t have to worry about the professional issue either.Â Then came the patience part. It was starting to get annoyingly long but I wanted to make sure I had enough to make a good donation.Â My husband measured my ponytail for me recently and he said I had about 8.5-9″ available, leaving the resulting hair at just about or slightly above chin level.Â Time for the big chop!

Jo was kind enough to agree to go to the salon with me for moral support and to take some before and after shots.Â We had a great time, especially since the stylist, Laurel, was so nice.Â She measured my hair again and told me that I had 10″ to donate! Wow, I had no idea.Â It was kind of weird watching her cut off the two long ponytails she gathered, but I didnâ?(tm)t regret it for a second.

Now I’m sporting a cute (if I do say so myself ;)) little bob that’s longer in front and shorter in back (it’s about an inch below the very base of my head).

My hair looks so much healthier coming out of the salon. I haven’t had hair this short in a while, but surprisingly it doesn’t feel that weird. And I haven’t even needed to use a scarf yet like I thought I would–I’ve been insulating my neck with my hair on the cold days out here and thought I’d be freezing after the big chop 🙂 The salon is so organized that they’re going to send my donation in for me along with another lady’s donation that was being cut later in the week.

Final note: the reason I chose to donate to PBL rather than the better-known Locks of Love is that PBL focuses on wigs for cancer patients, whereas LoL primarily creates wigs for people suffering from alopecia, which researchers believe is an autoimmune disease where the body attacks its own hair follicles. Alopecia sufferers are often completely bald, including women. While this is also a sad and, I imagine, demoralizing condition I personally wanted to focus on cancer sufferers, hence my decision to go with PBL.