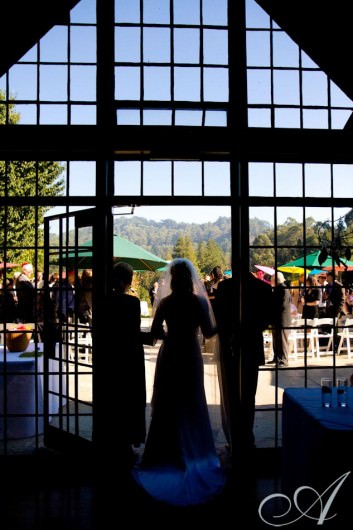 Ariana and Jesse are two of the kindest, warmest, most affectionate, down-to-earth people we have met. And they were an absolute joy to celebrate with. Ariana and Jesse met during a backpacking trip in Alaska. They love the outdoors and felt their wedding needed to reflect that. They chose to have some of the Jewish ceremony in a Redwood Grove at the Berkeley Regional Botanical Gardens in Tilden Park. Ariana was surrounded by her family and friends as she waited for Jesse to walk towards her. She looked so beautiful and happy.

As is customary, Jesse arrived amidst singing, surrounded by his family and his friends. He couldn’t have been happier when he saw Ariana waiting for him.

The setting was perfect. And the love of all those most important to them engulfed them as they embraced their parents during the bedeken and ketubah signing ceremonies.

Following these Jewish customs, we took photos by the redwoods. Here’s Ariana with her friends, enjoying the process.

According to Jewish tradition, once the ketubah is signed, a couple is officially married. Ariana and Jesse were so relaxed after that part of the ceremony and their joy emanated from them.

After the portraits, we traveled the short distance to the Brazilian Room for the ceremony and the reception. Ariana walked towards Jesse for this ceremony and they met under the huppah.

Ariana’s niece and flower girl sat down to enjoy the ceremony.

One last image, just to give you a taste of the beautiful colors and vibrancy of the day…

We can’t wait to share the rest. So definitely check back soon.

If you would like to see more of Ariana and Jesse, check out their engagement session with their beautiful girl Athena.