An Engagement at Princeton 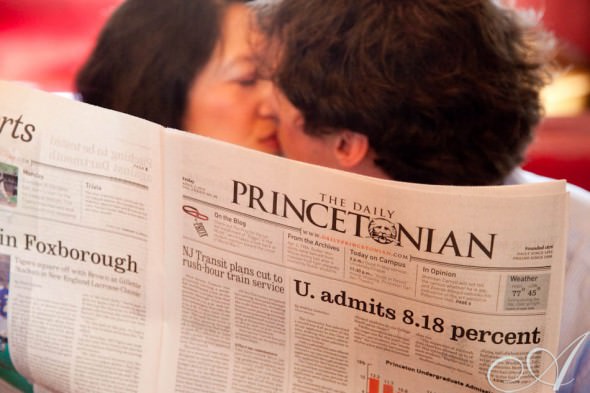 Last night, Jackie and William came over for the premiere of their engagement session photos. The viewing of the photos was a central part of the evening to be sure, but honestly I just had so much fun getting to know them better. I knew their story, the story of how they met, that is; and a good bit about their wedding planning. But now I feel like I know so much more about them, such as that they love good food and they enjoy cooking together. So then they tipped us off to a great Boston secret- a culinary school for average folk in Cambridge. We can’t wait to try it out.

But I digress, this entry is really about their engagement session, which was a blast! We journeyed down to Princeton University where they met while attending a reunion. It was the perfect location to do their engagement session. We were happy to oblige and found a weekend in early April that worked for everyone, including Naomi and Jack of Generations Cinemastories, who came down to film their story. With a backdrop as beautiful as Princeton’s campus, we were truly experiencing an embarrassment of riches. Add to that all of the connections that they have to their school and we ended up shooting for hours. We would have kept on going if the daylight hadn’t left us.

We wandered around campus with Jackie and William pointing out favorite spots from their time at Princeton as well as the important locations from the weekend when they met and fell in love.

They saw each other for the first time in this amazing library in Chancellor Green.

In the courtyard outside the library.

William’s dining club from his year’s at Princeton, called Tower, also happens to be one of the places where they met up during the reunion weekend. The light shining through the doorway was glittery and magical when we popped in to look around.

Naomi and Jack took a few moments to interview Jackie and William.

Of course, early April on the East coast is hit or miss as far as weather goes. Clearly Jackie and William have done something right with their lives, because we were so lucky. They had the most perfect weather and all of the stars were aligned for trees full of blossoms. I am a magnolia fanatic so this was heavenly.

For our fabulous couple….

Apparently Princeton has some very fun traditions, and Jackie and William were holding out on us until the very end of our session. It is customary for each class to have their own reunion uniform when they come back for reunion weekend. Celebrating the school’s colors- orange, black and white- and their mascot- the tiger- Jackie and William donned the outfits they wore that weekend for a few photos around Princeton’s landmark tigers at Nassau Hall.

I just have to close with one image that’s a bit more abstract, but I think it expresses what it must have felt like for Jackie and William to find each other. They were in what I imagine was a somewhat crowded space attending a reunion party and somehow they saw each other; the world slipped away. I created this in the library where they met for the first time and the effect is done completely in camera.

Of course this is only a glimpse of all the fun we had, so if you want to see a few more, definitely check out their slideshow.