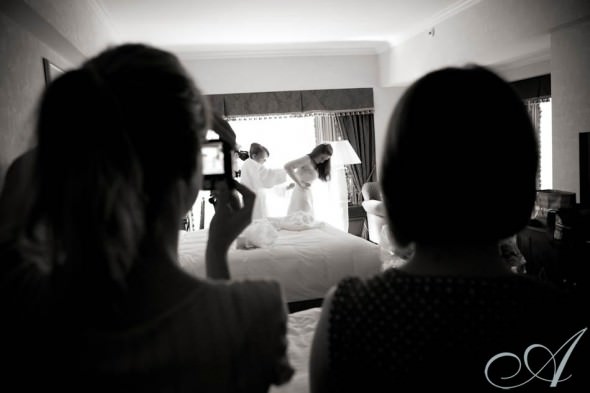 Erin and Darren met in London, got engaged in Paris, and have lived in the Boston area (Erin’s hometown) for the past few years. Their wedding had all the makings of a great international affair – lots of British humor and good fun mixed with the best Boston has to offer and some really special touches from Paris. Not to mention, that these two are just so lovely together. I am so glad we could be a part of their celebration.

We started the day at the Boston Harbor Hotel and ran into Darren in the lobby first thing. Erin needed a little more time to finish getting ready before they got to see each other, but I honestly don’t think he wanted to wait a moment longer. We did not delay. We went right up to see Erin and capture her preparation. The emotions on a wedding day are really what make it so rewarding to photograph. Erin and Darren’s wedding day was simply filled with great moments and expressions through and through. Here’s a series of my favorites, all from "first sights".

Erin’s mom takes her in- all decked out with the dress, the veil, the shoes- her completed look.

Erin and Darren had their first meeting outside the Boston Harbor Hotel, on Rowes Wharf. Darren stood with his back to Erin until she was ready. She told him to turn around and his eyes lit up.

Of course, this was also the first time she got to see him.

Body language says a lot, too. So sweet.

After they had a chance to enjoy the moment, we all hopped in their car (thank you to our fabulous driver Erika) and headed over to the Boston Public Gardens for a few photos. Erin had visions of willow trees and the swan boats and all the beautiful flowers, and I don’t blame her. What a stunning landscape! Still, those photos are definitively rivaled by the simplicity of this one that shows off Erin’s classic beauty.

We finished our portrait tour back at the waterfront with a few around the hotel. Dave and I had spotted this mirrored sculpture nearby on a prior to visit to the hotel. We knew we wanted to play there. Erin and Darren were amenable. So chic.

Then the day really got underway. The ketubah signing and bedeken ceremony took place in the board room. And they were officially married by Jewish law.

Followed by the ceremony under the chuppah in the Wharf Room. But for now, I leave you with just this one little hint of what’s to come.

Soon to follow… the ceremony, the party, and all of their special details.