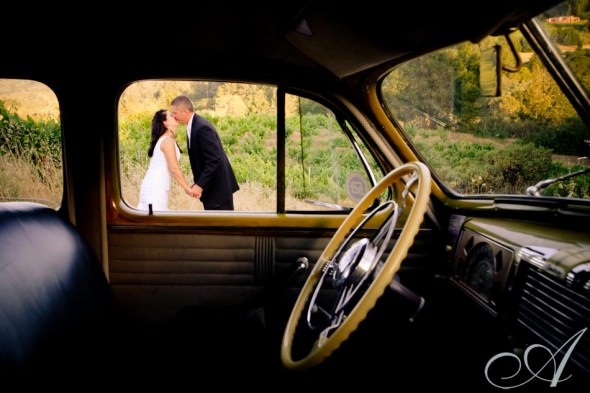 When last I wrote about Marla and Shawn’s destination wedding, I left off with the portraits. We actually had 3 different opportunities to capture images of our couple and their crew- before the wedding, immediately following the ceremony, and then during the reception when this fabulous vintage vehicle arrived on the scene. I will get to a few more with the car later, but first it’s time for dinner. Hans Fahden has it all- those gorgeous gardens for the outdoor ceremony, the airy tea house for cocktails, and the wine cave for an elegant dinner. Marla chose to deck out the space with tall candelabras, tea lights in red glassware, and varied stemware. It looked amazingly elegant.

Speeches followed soon after. Marla’s maid of honor/sister/the-person-who-introduced-Marla-to-Shawn was quite a hit. She had a list literally a mile long of advice for Shawn. Too funny!

Dinner was thoroughly enjoyed with great food and laughter.

But when the car arrived, we had to take a few photos. Here’s the whole gang…

Shawn’s girls were so cute. They played driver and drivee. They hopped in and out of the front seat and back seat, not once using the doors. It was clearly the best playground ever. Having so much fun, they were plenty happy to pose for a few peaking out the window.

We returned to the party for some serious dancing, kicked off by the happy couple’s first dance. What a beautiful embrace!

I just had to share one last image. In the sneak preview, I included the full color version of this moment from the ceremony. But Dave had worked it up with an alternate look as well. We use this technique, which is generally referred to as selective color, only occasionally, but sometimes it makes a real impact in a beautiful way. I love the choice for this image because the moment- a moment of prayer during the ceremony- is larger than life. For me, the variation in tonality gives a Greater Being a truer presence. You feel a difference.

If you want to see more, check out their Sneak Preview and their slideshow. And check back because Marla and Shawn’s Rock the Dress session is on its way.