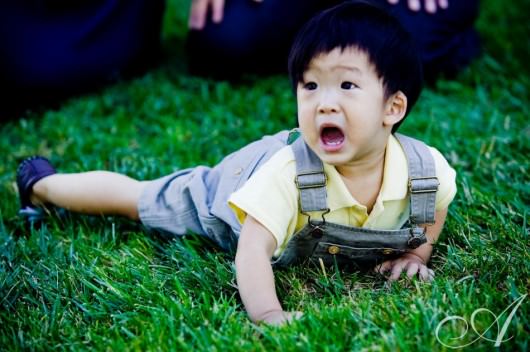 We had a great time with one-year old Isaac the last time we were in California. His mom hired us to take his first year portraits and suggested we take him to Stanford for the session. What a fabulous idea! We selected the art museum because we knew the grounds around it were beautiful. In the Korean tradition, this is a very special birthday and one in which the whole family celebrates. We were glad we could capture these images of Isaac with each of his parents.

Isaac was such a blast to shoot. He was always on the move which definitely kept us on our toes. Here he is “flying” with his dad.

And he loves the outdoors. While on the shoot, he attempted to climb a tree and enjoyed the feel of the grass. He even offered me a rock.

I so love shooting kids because they are so honest with their emotions. Isaac was no different. He has the sweetest expression while his dad gives him a peck on the cheek.

Huge thank you to Yuhyun for choosing us to shoot these special portraits of Isaac. He is such a cutie and we had a great time.

If you want to see more of Isaac, click here.