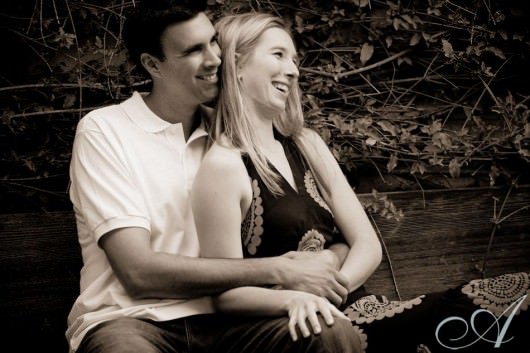 When Meredith and Bronson, along with mom Ren, sister Lindsay and coordinator Grace, came in for a consultation, we knew we wanted to work with them. There was so much vibrancy in this group. We felt sure celebrating Meredith and Bronson’s union would be a wonderful experience not only for their friends and family but for us as well. Fortunately, the feeling was mutual.

Their engagement session proved that we were right about how much fun they were. Dave met them at Gloria Ferrer Winery in Sonoma where he captured Meredith and Bronson at their loving and silly best. My favorite image from the shoot is of Meredith and Bronson in this HUGE blue chair, similar to the one outside Ikea. After their shoot, I was able to join Meredith, Bronson, Ren, Lindsay, and Dave for a relaxing break. Dave got to know both families even better at the rehearsal dinner. He enjoyed tales of Meredith and Bronson’s early years as well as their basketball first date and other escapades.

When the big day came, we were thoroughly excited. We had been a part of the journey throughout and the anticipation had been building.

We arrived at Stonetree Golf Club in Marin to begin coverage of Meredith, Lindsay and Ren getting ready. Lindsay and Ren helped Meredith get into her silky gown and tie her waste ribbons into two bows.

When she was all set, we witnessed Meredith and Bronson’s reveal. No wonder they were both so affected- they both looked fabulous.

We took them on a quick tour of the grounds for photos in the late afternoon light. We followed this with family photos on the patio. Everyone was great dealing with the cool weather and we moved swiftly through the groupings.

When we returned to the lobby, I saw the transformation that had occurred. I couldn’t imagine a more perfect execution of Meredith’s vision. When she got engaged, she knew she wanted candles. She chose a winter date so that the glow would have the perfect dark backdrop. The season provided additional inspiration and the look for her wedding took shape. What I saw when I walked into the completed lobby and reception hall was a dream- whites on whites in every texture, shape, and size with silver, mirrors and lights as accents. The flowers and cake were ideal touches to the theme. The care and attention to detail were apparent. It was truly magical.

When Meredith appeared at the end of the aisle, everything was complete. She glowed as she walked towards Bronson.

But it wouldn’t have been Meredith and Bronson if along with the elegance there hadn’t been lots of laughter. The reception complemented the ceremony perfectly with crazy dancers, humorous toasts, and lots of high fives.

To Meredith and Bronson, thank you so much for honoring us and including us in your day. We had a blast!

Huge thank yous and kudos to Grace from a Touch of Grace for keeping everything together. It was truly a pleasure to work with you.